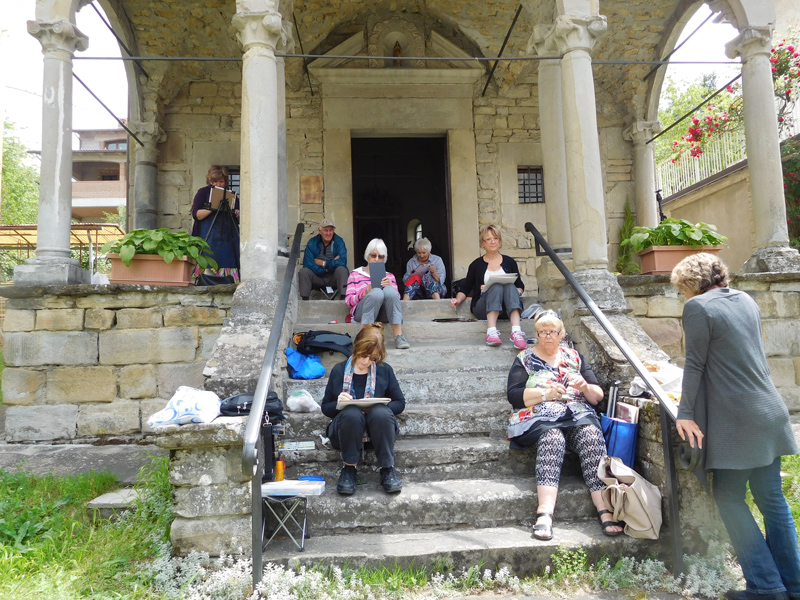 Regina Hona’s Painting Workshop in the Tuscan/Emilia-Romagna Hills began in the city of Bologna. Everyone met at the designated hotel for a meet and greet. Since we had some time before the bus came to take us to the mountains and the city weather was balmy in the morning, I took some interested people on a historical walk through the beautiful town of Bologna.

Catia, who had been my bus driver for 5 years had decided to sell her bus in order to stay home with her family. This is where I met Stefano and Eugene, who were now our bus drivers. As we drove towards the mountains, we could feel the city angst leave us. We passed farms, rivers and valleys before arriving at our hotel in Riolunato, located high in the Apennine mountains.  The hotel has spacious rooms, great daily menu and the studio is a delight, with mountain views and interesting skyline. Everyone enjoyed the studio as we could leave our art gear or finish our work. 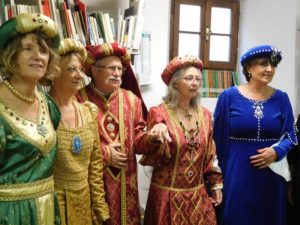 On Sunday, we drove down the Tuscan side of the mountains, Cutigliano and the Mayor welcomed us in their 15th century Council Palazzo. Unfortunately, the weather was not kind as the rain did not cease. The town was trying to celebrate the ‘Festival of Flowers‘, which involves decorating pathways with flowers, but the rain was washing away the work.The places I go I also have cover for the painters such as inside the museum castle or ancient churches etc.

The bar had a large enclosed covered area with interesting views and gave us total protection from the elements, so we could paint. After lunch we were invited to visit the medieval costumes which are made by Elvira for her town’s celebration. Some of our non-painters were able to dress up.

While staying in Riolunato, we were invited by the town to attend their theatre production on the Italian Independence Day. There was musical recitals and opera, the mayor also came to visit us and present CD music from the region for all to keep and to remember their time with them. After 6 days, we moved to the hotel in Palagano, located further down the mountain and in the Emilia-Romagna Region. We painted markets, people, cluster of farmhouses and were enchanted with the church belltower ringing their bells to summon people to wake up, go to lunch, dinner and time for bed. 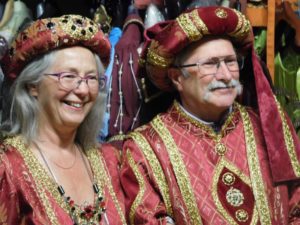 It was the first time for Regina and I could see she was enthusiastic, from setting up her easel to capture the views in front of her to gathering everyone around her to follow her example. Regina was in the farming areas and free from the confusion of the city traffic. The mountains still maintain their mystery, with hidden pockets of gems, such as the 15th century Watermill and the deserted town of Gombola.

In Montefiorino, the history of World War II Italian Resistance was explained by Andrea Ruggi. Regina and others walked to a town called Vitriolla, using the old market road, which has lovely maestri (small shires) and farmhouses. Then a local called Nadia was our host with drinks and cake, which she kindly gave us in her 13th century tower house as there as a storm brewing outside.

The city trip to Modena was full of warm sun and a trip to the Ferrari Museum was definitely enjoyed by the men. While in Modena, I organised a visit to the Library were the Este Bible(also recognised to be the most beautiful book in the world) was showcased to the group. 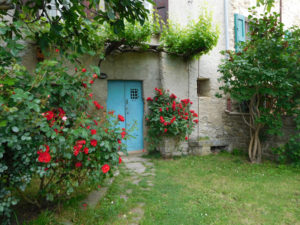 On the last day, Regina had everyone’s work out and then we had time for more painting in the afternoon when the sun was shining. Late afternoon the local mechanic came to give anyone interested a buggy ride. It was great riding along the ridges and narrow roads up to the top and down again. The owner of the hotel, Almano, also showed us his private Balsamic brewing in the ceiling of our hotel. He allowed his precious 35 year stock to be sold to anyone who wanted something special to take home. It certainly is liquid gold.

European’s weather has become unpredictable. During our time in the mountains, France and Milan were experiencing floods while we were lucky we only got a bit of the problem but nothing to stop us from our program. At the end everyone was amazed at the amount and variety of work accomplished. Most importantly, they witness the generosity and kindness of the local people in giving us entertainment, protection and assistance.

I’d like to thank Regina for her support and friendship during our time together and the beautiful pastel of Palagano church, which I have given to my uncle, Monsignor Don Giuseppe, whose parish is Fiorano, on his celebration of 50 years of service.

If you are interested in painting or visiting the Tuscan/Emilia-Romagna hills – please click here for more information. 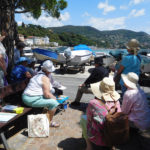 Previous:
Reminiscing about the Bay of Poets 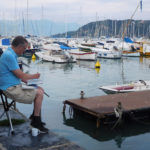